The 7 Most Popular British Video Games 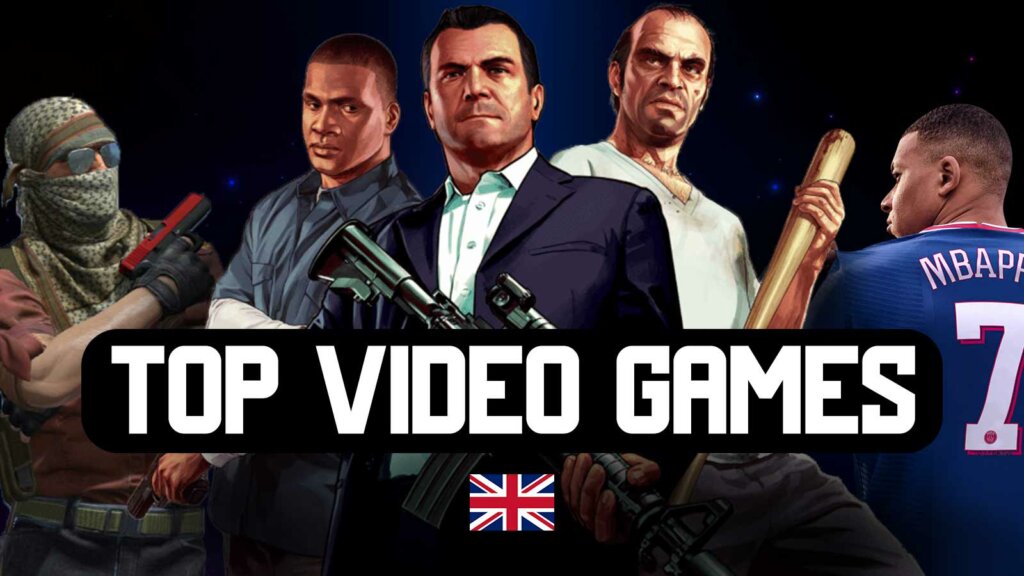 Want to know what video games are hot right now? We have assessed the best video games across a broad range of platforms. Get our top games today!

According to recent statistics, the UK video games industry was worth an estimated 5 billion British pounds-plus in 2020 alone, incorporating an extensive value-added chain. This only reflects how many people are into video games. However, we must emphasize the fact that video games, as well as gambling, can turn into an addiction which can damage your health and relationships. We advise all of our readers to ask for help when in need.

Valve’s Counter-Strike launched in 2012, quickly gaining a cult following. Even now, CS:GO remains one of the most popular UK video games.

And while a decade has passed since this video game first caught the attention of gaming fans, its popularity has yet to dwindle.

While Counter-Strike might not have the compelling visuals of a game like Overwatch, its active community and core gameplay settings continue to delight. If you’re a video gamer, you’ll likely agree that Counter-Strike is a genre leader in no-frills immersion and a competitive scene, with the top CS GO teams being some of the best in the esports world. Nowadays, it is also free-to-play, which makes it even more marketable.

If you’re keen on games that let you capture the bad guys, you’ll love CS. By taking a spot-on set, you’ll get your adrenaline flowing by pursuing and hunting out terrorists through different role plays. If you play enough and hone your skills, you may join the ranks of the best CS GO players out there.

A sample of the fun of Counter-Strike: Global Offensive

Why you should (and should not) play CS:GO

In a football-crazy nation like Britain, a video games UK list wouldn’t be complete without mentioning FIFA 22.

This sports game is the 2022 re-issue of the award-winning video game of the same name that first launched in 1993. Thankfully, FIFA 22 has continued the tradition as expected.

You’re still able to pass your way up the field as simply as you could in the first edition, though you’re able to take advantage of more angular goal targets from your team members. The new game features improved positional accuracy with AI attackers and a prompt that makes players run for the ball when you flick the right stick. This last feature is vital—the game of football loses all meaning when no one tries to score!

FIFA 22 is an ideal choice from the British games list for fans of the beautiful game, together with the clubs, betting in best UK online casinos, and the whole culture around it.

What FIFA 22 did right and wrong

Batman: Arkham Knight is the last release in the initial Batman video game series—the fourth instalment and among the first video games UK gamers opt for.

This Rocksteady Studios release became available on PlayStation 4 and Xbox One in 2015. It is widely considered one of the top British video games by gaming fans.

Everything from the primary campaign to the comic book noir theme of the game is impeccably conveyed, and there’s an explosive finale to look forward to. You are guaranteed to find the fight scenes and detective mechanics engaging. The props, characters, and acting are well-thought-out and fit the universe.

In 2020, the game publishers released a patch with two new designer costumes that unlock Anime Batman and Zur En Arrh Batman. Some gamers believe a possible reinvention of this legendary trilogy is in the cards in Q4 of 2022. Still, it’s hard to say whether this will happen or not.

We will certainly let you know if a worthy sequel launches, so stay tuned.

What we think about the game

This Hitman 2 update is the highly-rated eighth instalment of this IO Interactive video game. Hitman 3 continues the action-packed excitement of the globally acclaimed trilogy.

Action and adventure game fans will love that you can work on your own, reading maps for directions and unlocking quests. If you’re not familiar with the previous editions, you could start by exploring the murder mystery props and try to get your hands on the ten targets. Hitman 3 certainly fits its puzzler brief!

While the standard gameplay runs around 8 hours, you’ll get up to 45 hours of play on the props, effects, and side actions. Few will argue against Hitman 3 deserving its place in the top video games UK ratings.

Death awaits, but here’s what awaits you on Hitman 3

Combat scenes could be more fluid.

Believe it or not, Solitaire has a spot in the World Video Game Hall of Fame, so we naturally had to add it to the British video games list.

While many people are familiar with the simple app versions, this video game edition has catapulted the card game to even more tremendous popularity. That’s probably thanks to its new multi-platform access and that people can now play it for free, without systems like free spins upon registration for paid slots.

Several other highly immersive games on the Solitaire table are attracting the attention of video games UK enthusiasts—Spider, Holy Trinity of Klondike, and FreeCell, among them.

Now that Solitaire is available to download for free from iOS and Android app stores, you can play your pick on the go. If you’ve played this game before, either now or in the old days of desktop-only access, you’ll likely agree that albeit being calming, it can affect your brain similar to gambling addiction.

A more in-depth look at Solitaire

If you want to place bets on your solitaire rounds, make sure to only gamble in licensed online casinos so you can have the guarantee of fair results.

Few UK video games have achieved the level of acclaim granted to the latest entry in the GTA series, launched in 2013.

This action-adventure hybrid game is listed among the most popular games of all time globally and in the UK. Grand Theft Auto V is the seventh entry into the series when considering main instalments.

Many video gamers love that, like its predecessors, GTA V mirrors primarily American life in all its most ridiculous glory. This Rockstar Games release has already been updated for 2022 with a patch introducing three new modes: the Fidelity Mode, Performance RT Mode and Performance Mode. But the big win for video game fans this year is the game’s faster loading times.

Some facts about GTA V

The publishers have worked a whole lot more fun into the old, already successful formula. You will use stealth and flair to catch your Pokémon. This instalment is not in short supply of good design directions.

While the old releases had gamers battling Pokémon trainers, this release more closely resembles The Legend of Zelda: Breath of the Wild, hinging extensively on its adventure pedigree.

The open-world set of Pokémon Legends: Arceus is a welcome departure from old versions’ turn-based fights and battles. With new aesthetics and content, this latest instalment in the Pokémon story is almost guaranteed to have British video game fans skipping work or school to play more.

How you’ll catch ‘em all on Pokémon Legends: Arceus

What to know before you catch ‘em all

So, here you have it: these are our best picks of British video games. The details we have provided will inform your decision.

Whether you are a seasoned gamer or new to this action-packed world, take some time to comb this guide. If you wish to change the direction and try playing on UK slots sites, we have many more options for all needs and desires.

Did we miss any worthy addition? Is there some detail we missed about your favourite game? We would love to hear from you in the comments.

Ways to Get Free Spins for Coin Master