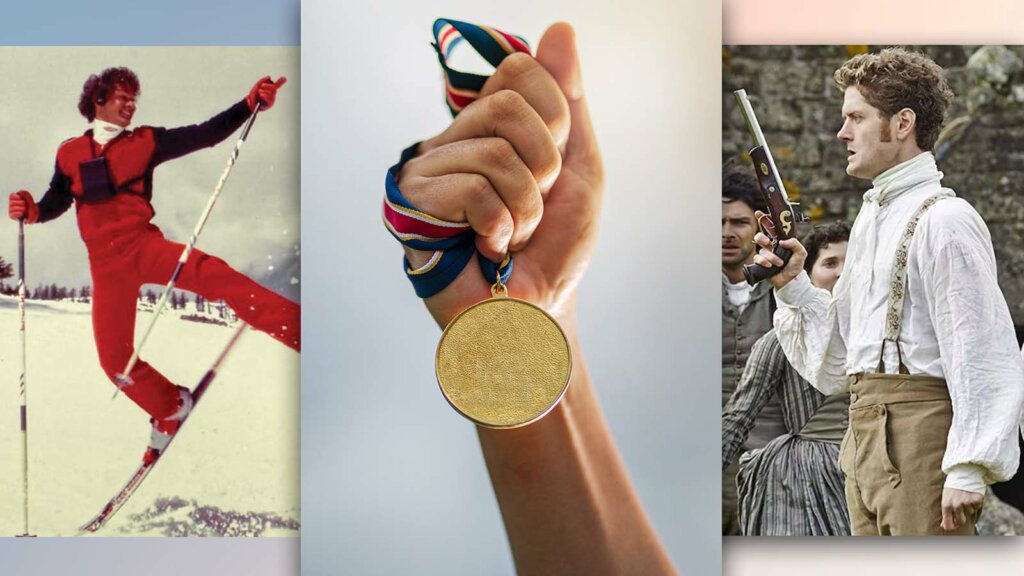 The Olympics is perhaps the most prestigious sporting competition worldwide. With several countries taking part, the event usually features an exciting list of Olympic games.

The 2021 Olympic event was no exception

The Olympic sports list 2021 featured 33 exhilarating sports that saw athletes battle it out against each other on the pitch and fans of each opposing country rendering support to their countrymen through songs, claps, and chants.

Some common games displayed at the Olympics include swimming, football, basketball and volleyball.

However, considering the standards of today’s Olympic events, it will surprise you to know that some quite peculiar games have been once included in the event.

Grab a seat and get comfortable as our team will take you back into the Olympics’ past and present you with some of the funniest and weirdest sports that were ever part of this iconic event.

Race Walking is the only sport featured on the list that is still included in the Olympic games. However, it has been announced that the game will be discontinued starting in 2024.

Do you find the name contradicting?

Well, you are not the only one.

A lot of viewers were confused by the event when it first appeared in the 1984 Olympics. The game made the following appearances at the Seoul Olympics in 1988 and Barcelona Games in 1992.

This competition is certainly different from the modern version of artistic swimming or synchronized swimming you may have witnessed.

In this competition, like any other swimming one, swimmers are supposed to race and try to finish first.

However, this game comes with a strange feature: it adds obstacles that the swimmer would have to overcome before finishing the race.

This game only appeared in the 1900 Paris Olympics and featured three obstacles, including pole climbing and boats to climb onto and swim under.

You might now probably be thinking: “no, not those poor deers.” Luckily, unlike the pigeon shooting competition, this sport does not involve live deer.

Rather, the organizers used cutouts of deer with three concentric circle targets.

The rules of a game

Shooters are allowed two shots at each of them. However, the deers didn’t just wait to get shot at. They were designed to move quickly (23 meters in 4 seconds) past the shooters, who stood at 110 yards.

The event first appeared in the 1908 London Games and was featured at several Olympics before losing medal status.

A start-up to a great career

The event made Oscar Swahn popular, a Swedish who made his Olympic debut at age 69 in 1908 and became the oldest gold medalist of the event. He actively contested in all games till the 1920 Olympics, where he won a silver at age 72 and retired.

If you think weird games are all out of the Olympics and we won’t be seeing one anytime soon, you may be surprised!

Even the Olympics 2021 new sports included games that carry a strange aura, such as synchronised swimming, equestrianism, modern pentathlon and many more.

New events in the 2021 Olympics also included 3×3 basketball, sport climbing and surfing. Hence, one may say that strange games are still a reality in nowadays events.

Most of the weird Olympic sports you will find here have been discontinued because they were found to be too inadequate, crass, or just not entertaining enough for modern views. Here are some of the weirdest Olympic sports that no longer exist:

As gory as it may sound, live pigeon shooting was a game at the Olympics, particularly in the 1900 Olympic Games in Paris.

In order to win, you had to shoot as many pigeons as possible in the allotted time frame.

The winner of the competition killed 21 birds, with an additional number of other 300 pigeons being shot by the other Olympic contestants.

This anomaly of a game only happened that year as it was discontinued before the next Olympics.

Luckily, nowadays, live pigeon shooting is just one of the many weird Olympic Sports that no longer exists.

Tug of War was one of the earliest games at the Olympics. It is funny that this energetic game we used to play during our childhoods had found its way to the Olympics.

The winner of the competition was the first team that succeeded in pulling the rope a full 6 feet or pull the furthest within 5 minutes.

Who were the top competitors?

The country known for excelling in this sport was Great Britain. This is because the British team was usually made up of police officers.

This weird Olympic sport is a funny mix between walking and racing.

The main requirement for this competition is for athletes to be in contact with the ground at all times.

Although the idea was supposed to be innovative, the execution turned out to be pretty dull.

To achieve that, both feet must be on the ground, and the leading leg must be straight when the foot comes in contact with the ground.

The duelling pistols competition wasn’t like the old Wild West that you have just envisioned.

This game was much less harmful, and no one ended up dead at the end of the competition.

The athletes would only shoot at plaster or stuffed dummies, creating a thrilling moment.

In 1908, the game took a more exciting and dangerous turn. The organisers decided to ante the danger by replacing dummies with competitors actually shooting the wax bullets at each other.

The athletes had to wear protective coverings against the impact of the wax bullets, but it only did little to save them from injuries.

A player was reported to have lost the skin between his thumb and pointer finger during a round.

Therefore, the game was later retired from the Olympics.

Plunge for distance is a swimming competition that we thought would be a worthy addition to our list of strangest Olympic sports.

It involves athletes making a standing dive into the pool and trying to go the farthest distance under the water before a full minute is up or the athlete’s head comes above water.

Distance plunging was only featured once at the Olympics, in 1904, with American divers as the only competitors.

The first summer Olympic game was played on April 6, 1896, while the winter games came decades after in 1924.

Some of the weirdest old sports included in the 1896 Olympics event include:

The Rope Climbing competition must have been very fun to watch

Initially, when the sport was first introduced, competitors were awarded points based on their style and speed of climbing the rope, irrespective of the final position.

Later years saw the rules change as players were also judged by their position, with the primary rule being – no legs allowed.

At the end of the game, medals were awarded depending on the positions.

This event was a regular feature at three Olympics around the end of the 19th century.

It’s a men-only sport where players have to grab a weight with each hand and lift it as fast as possible into the air.

The difficulty lies in having to do this three times to get a listing on the scoresheet.

The weirdest Olympic sports are not limited to the old Summer Games alone. There were several weird Olympics sports in the Winter competitions as well.

Sled dog racing was a main attraction at the 1932 Winter Olympics at Lake Placid in New York.

13 drivers were involved in the competition, all from Canada and the United States.

Notable participants include Eva Seeley, the only female competitor at the third Winter Games competition except for figure skaters.

The sled dog racing event was considered to be just as entertaining as horse racing.

The game was discontinued for some time but appeared again at the 1994 Winter Olympics in Lillehammer.

Not all weird Olympic Games are questionable choices. Some are great to watch and bring back good memories.

An example is the Ski ballet which first appeared as a demonstration sport at the 1988 Winter Olympics in Calgary, Canada.

The competition featured 12 men and six women who used ski poles to perform twirls, jumps, flips, and dance styles in acrobatic routines on a ski slope that is as wide as a football field.

What made the event more exciting was the accompanying music that ranged from classical music to pop. Performers were judged based on their choreography, technical difficulty, and overall performance.

This sport was present once again at the 1992 Winter Olympics as a demonstration sport.

Unfortunately, it couldn’t elevate to medal status and has since not returned to the Olympics.

You can call this the fast and furious event of ski games. The sport made its only appearance at the 1992 Winter Games in Albertville, France.

It involved skiers running down a 59-degree grade in a straight line with great velocity from a mountaintop in an attempt to record the fastest speed inside a 100-meter timing zone.

The tragic outcome of a brilliant concept

The event, though thrilling, was nevertheless dangerous. On the morning of the final, the competition was brought to a tragic end when 27-year-old Swiss speed skier Nicolas Bochatay collided with a snow grooming machine during a practice run. He suffered internal injuries that he never woke up from.

It was not surprising then to see the event left out in the next winter Olympic games and has not been featured since then.

So, here you have it: this is our selection for the weirdest Olympic games of all time.

We certainly hope our compiled list has provided enough information for you to grasp a full image of the most representative peculiar sports that have ever graced the much-awaited international competition.

Did you know that boxing is also an Olympic sport? It has been featured at every Summer Olympics competition since it was introduced in 1904. Several England boxers have become top champions at this game when taking part in the Olympics.

If you are a fan of sports and want to learn more creative details about this exciting world, you can read our team’s article featuring British rugby players.

Have any additional questions?

What is the most unpopular Olympic sport?

Synchronised swimming. Generally, swimming events do not get as many views as other sports in the Olympics, and when you put synchronised games into the mix, it just doesn't appeal to a large fanbase.

Which sport is no longer an Olympic sport?

Several sports have been discontinued from the Olympics since the event started, with the most recent being baseball and softball. These two games were voted out of the 2012 Summer Olympics in London, UK, at the IOC meeting on July 7, 2005. According to recent official news, the IOC has approved the two events for the new list of Olympic games.

Is skateboarding an Olympic sport?

Yes, Skateboarding is currently an Olympic sport. It was last featured at the Tokyo Olympics in 2020. There are two different skateboarding events for men and women at the Olympics, namely park for the men and street for the ladies.

Why is chess not in the Olympics?

Is poker an Olympic sport?

No, just like chess, poker is a game of strategy. It is a better fit for the World Mind Sports Games.

Is Ping Pong an Olympic sport?

Yes, ping pong, or table tennis, was introduced to the Olympics at the 1988 Games. Since then, it has been a popular feature of the Olympics. The game features both singles and doubles competitions for men and women.